12 RCDS students and three faculty members traveled to Phillips Exeter Academy in New Hampshire to compete in the 2020 U.S. Invitational Young Physicists Tournament (USIYPT), an annual physics research and debate tournament for high school students. In the year leading up to the tournament, school-based teams investigate several undergraduate-level research problems, preparing to compete in hour-long student-led debates called "physics fights" over the quality of each team's solution. Each round begins with the reporting team giving a ten-minute summary on one of the four official tournament problems. Next, the opponent and reporter engage in discussion about the problem, just as members of competing research groups at a conference might discuss a presentation. The competition, which is judged by physics professionals and professors, begins with six preliminary physics fights after which the top six teams advance to the finals. After a strong showing, Rye Country Day went into the final round in second place and finished the tournament fourth.

Proud of their performance at the tournament and their year-long efforts collecting data and developing theory, the students on the RCDS YPT team shared their work with schoolmates at a presentation that showed what a physics fight is like. 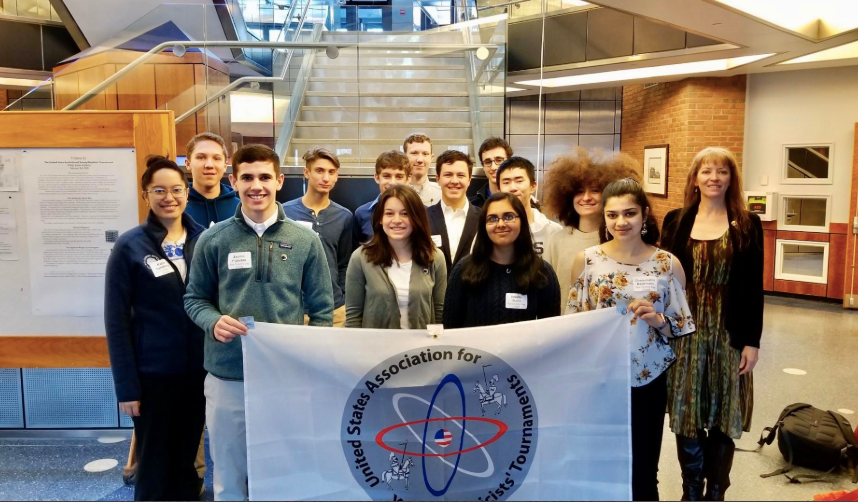 The Astronomical Unit:
By 1700 AD all observable sizes and distances in the solar system could be measured, but only in ratio to the semi-major axis of Earth's orbit. This led to odd results. Ole Rømer, for example, measured the speed of light in ratio to the orbital velocity of Earth, and Newton calculated the mass of the Sun in ratio to Jupiter's mass. However, neither the speed of light, nor the mass of the sun, could be found in standard units until the mid nineteenth century. In fact, this was such a problem that scientists traveled the world in order to observe the 1761 and 1769 transits of Venus in hopes of measuring the distance between the Sun and the Earth.

Measure the length of one Astronomical Unit. If your result depends on other physical or astronomical quantities, you should measure as many of these that you can.

The Archimedes Death Ray:
The great Sicilian engineer Archimedes (c. 287-212 BC) famously fought off the Roman invasion of Syracuse using his many high-tech inventions. While most of his booby-traps relied on mechanical advantage, such as pulleys and levers, the most famous invention was a giant heliostat that sunk Roman warships. As legend has it, Archimedes instructed each soldier to highly polish his shield and reflect the morning sun to light each Roman ship ablaze. The television show "Mythbusters" devoted three episodes to testing the physical feasibility of the "Archimedes Death Ray" (29-September-2004, 25-January-2006, 8-December-2010), and declared the story implausible in all three episodes. However, a group at the Massachusetts Institute of Technology (MIT) came to the opposite conclusion after performing a successful experiment in 2005.

Spherical Magnets:
Sets of 216 strong spherical magnets are sold in 6×6×6 cubes, which make wonderful toys for anyone old enough to know not to eat one. According to neocubes.com: "The magnetic balls will almost mystically guide your hands to build complex fractal patterns and other symmetric designs found everywhere in nature and space."

Investigate, both experimentally and theoretically, the stable configurations that these can make.

The Apparent Weight of an Hourglass:
As the sand flows from the top to the bottom of an hourglass, does it appear to weigh more, or less, than it does after the sand stops? On the one hand, some of the sand is in free fall so it is not in contact with the scale, but, on the other hand, an additional upward force is needed to stop the sand when it hits the bottom pile. In their 2017 paper, Achim Sack and Thorsten Pöschel answered this question for one particular hourglass using one particular line of reasoning.*

Investigate the apparent weight of multiple hourglasses, using more than one line of physical reasoning.

* See: A. Sack and T. Pöschel, "Weight of an hourglass—Theory and experiment in quantitative comparison," American Journal of Physics, 85, 98 (2017).